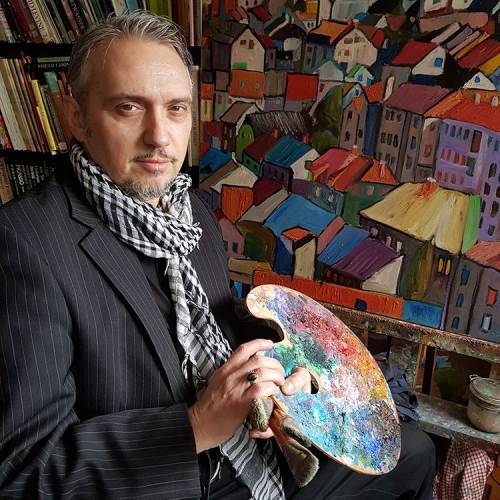 Robert is a contemporary artist, currently living and working in Adelaide, South Australia. As the third generation to be professionally involved in the arts, he has been immersed in the art world for as long as he can remember. Art is Robert’s bread and butter, as well as his passion. Driven by the life motto, “Nulla dies sine linea”, Robert paints every day, expressing ideas mostly in oil on canvas, but to paraphrase Publius Terentius: I am an Artist and I am not repulsed by any Media.

Robert’s art has been exhibited in Europe, the USA, and Australia with many of his works housed in both private and public collections. Robert also researches and writes about art and has been published several times. One of his major writings produced as part of his Master’s Degree thesis, is a published biography on artist Vladimir Udatny.

Robert is also involved in lecturing in the tertiary and secondary education of Art. His interests extend further to music and composing. Les Gitans Blancs, a Gypsy Jazz group that Robert formed, performs interstate and internationally, and has released two albums.

To view, either click the “eye” icon below the image for a quick preview, or click the image or print title for detailed information. Make your selection, then either drop us an enquiry or call direct on (08) 8373 4640 and we’ll go from there.